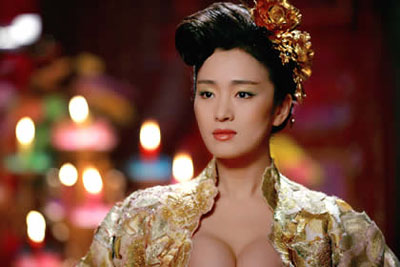 One of the most recognised Chinese faces in the world today is that of actress Gong Li. Her memorable screen roles of strong willed women challenging an obstinate male dominated society found enthusiastic audiences in the east and west.

Films such as the historical dramas Ju Dou and Raise the Red Lantern were world-wide successes; while smaller, more parochial films like the urban drama Breaking the Silence were garnered with critical and local rewards.

Gong Li has at times been compared with the great Chinese screen stars of the past, most notably Ruan Lingyu (The Goddess) and Lin Dai (The Kingdom and the Beauty). The main difference being that these stars had their careers and lives cut short in their prime by a society unable to accept women on equal terms to men. In a career spanning nearly twenty years, Gong Li has shown, in public and private, that strong-minded, tenacious women are a vital part of China’s future.

The youngest of five children, Gong Li was born on December 31, 1965 into an academic family in Shanyang, North Eastern China.

She developed a love of music from a young age and wanted to become a professional singer. In 1985 she applied to China’s most prestigious arts academy to study music – and was rejected. Two years’ later she was accepted by the Central Drama Academy in Beijing to study acting. Gong Li and her teachers soon began to find out just what a naturally gifted actor she was. In her second year at the Academy she won the lead role in an historical drama titled Red Sorghum. This was also the directing debut of an ex-actor, Zhang Yimou.

In my opinion, Red Sorghum isn’t a particularly good film but Li owns every frame of the movie, as a teenage bride sold by her parents to a diseased, elderly brewery owner. The film turned out to be a surprise hit in China and overseas.

Her next film with Zhang Yimou was in 1990 and called Ju Dou. In hindsight, many cineastes see this picture as the first in a Gong and Zhang trilogy which would make them household names in China and major Asian cinema figures in the west.

Following a similar storyline to Red Sorghum, Ju Dou is set in a 1920s fabric dye works and is a brutal and passionate drama. Li is perfectly cast as the enslaved young wife who over time exacts a powerful physical and emotional revenge from her tormentors. By the production’s close star and director were romantically linked.

Raise the Red Lantern followed a year later to even greater acclaim and consolidated Zhang and Gong’s carees outside of China.

Lantern tells the story of rivalry amongst the wives of a rich landowner, with Li being the newest and youngest spouse. The film is much less visceral than Ju Dou; Zhang creates a stifling world of ritual where treacherous mind games are played out. The movie’s closing shot of a woman listlessly sweeping a courtyard is one of the most memorable and shocking moments in Chinese film. Raise the Red Lantern truly deserves its place in world cinema.

During the early 90s, Gong was also appearing in many Hong Kong genre movies. Professionally, it was a good move as Hong Kong films attracted large audiences in Asia. She worked with the cream of the Cantonese film industry. Li also embraced the none-too-subtle commercial world of the Hong Kong media and hardly ever refused an opportunity to appear in advertising campaigns selling products from fridges to mobile phones.

The Story of Qiu Ju (1992) is a very different type of film – a contemporary comedy set in rural China. Gong Li is a feisty, albeit heavily pregnant, peasant’s wife who challenges the authority of the local village leaders after her husband is assaulted by a government bureaucrat. She demands an official apology, eventually taking this request to the central government in Beijing. A perfect change-of-pace film which was hugely entertaining and quietly subversive. Li’s performance struck a chord with the Chinese people and many consider Qiu Ju as her best film role.

“The eyes are the windows to the soul” is a mantra actors know only too well. In Gong Li’s case it’s her face which is so expressive but not in an outrageous/comedic fashion – it’s all very understated but so very potent. The audience knows exactly what Li’s character is thinking and the conflict that often underpins these thoughts. This form of expression is uniquely showxased in Breaking the Silence.

Little known outside China, Breaking the Silence (2000) is Gong Li’s favourite film and a picture that captures China’s economic miracle as being a mixed blessing for the population. Li is a divorced, single mother struggling to keep her lowly factory job and to look after the special needs of her deaf ten year old son. Her daily life is emotionally draining and a seemingly endless financial balancing act that threatens to derail the family unit. Li’s performance, and the film in general, is reminiscent of the great Italian neo-realist cinema of the late 1940s. She was awarded the Golden Rooster prize (China’s equivalent to the Oscars) for her role in Breaking the Silence, and considers this her finest screen acting to date.

By the late 1990s, Gong and Zhang had parted ways; Gong Li had recently married a Singapore businessman. For a major international star she has steadfastly refused to learn English and shown little interest in a Hollywood career. It’s character traits like these that have endeared her to the Chinese people – a world famous Chinese person who is content to live and work in China.

Award-winning cinematographer Chris Doyle (Ashes of Time, Temptress Moon) is bemused by the local reaction to Gong Li and sees it as being quite unusual. He has worked with her on at least three films and physically he describes her as very un-Chinese looking: “she has large thighs, oversized breasts and crooked teeth”. Although said partly in jest, Doyle does make the point that Gong Li’s appeal is more than skin deep – there’s an ethereal quality to her. No matter what she might say or do the Chinese public will always find Gong Li fascinating – the mark of a true superstar!

In 2008, China’s year of the Olympic Games, we find Gong Li involved with this important event as an “International Image Ambassador”. She seems to be the public face of so many organisations these days (United Nations, L’Oreal,Unesco,etc…). I’m amazed she has time to make movies. Her output of films has slowed since 2000 and in the past 2-3 years has concentrated on maximum exposure via Hollywood blockbusters (Memoirs of a Geisha, Miami Vice), with pretty tepid results. Still refusing to speak English, she was dubbed in each film.

Thankfully, last year she returned to the Jade screen with Curse of the Golden Flower, a full-on historical epic set in the Tang dynasty where Emperor (Chow Yun-Fat) and Empress (Gong Li) match wits and armies in a Shakespearean-styled melodrama. Reunited with director Zhang in this film, shows again that Gong Li does her best work on home ground.

This entry was posted in Uncategorized. Bookmark the permalink.