Talking to Muay Thai Stars and Not Losing 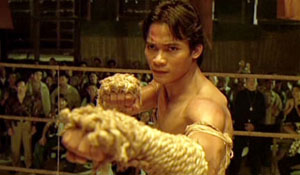 Well, Prachya Pinkaew and Tony Jaa, the director and star of Ong Bak (the best Muay Thai film out of Thailand, well ever really) were in Sydney to shoot scenes for their next film Tom Yum Goong and guess who managed to score an interview? Well, OK, yes THAT person, oh and yes THAT person as well… look for the sake of relevancy, it was me OK? That’s right, I get to interview the guy who made you wince with every elbow and knee he righteously landed on the bad guys in his search for Buddha (well at least the head of one) and speak to the guy who let him do it – so yes this was foremost in my mind when I prudently removed any biting criticisms of Ong Bak well before I met either of them.

So I show up to the hotel they’re holding the interviews and a television crew with Tony is just finishing up. I unfortunately didn’t catch any of the actual interview itself but as I dutifully take a seat waiting for my opportunity, I mentally cross off the questions she re-asks to the camera – mainly to do with Tony’s training and comparisons to Jackie Chan or Jet Li – whittling down my actual list even more. In hindsight I’m not sure exactly why – maybe in consideration for questions they’ve been likely answering all day but more likely because they sounded cheesey when somebody else asked them.

Anyway the television crew packed up, Prachya had come down and my turn had come. I tried some small talk with Prachya before Tony joined us and found out they had been filming the last day or so – exactly where I couldn’t work out (later found to be Darling Harbour). Tony finished his stretching (what I’d like to imagine as mandatory catharsis) and joined us – along with an interperator. I think I was hoping for more of a relaxed conversation than a straight out interview from this session so there was a bit of disappointment despite not being wholly surprised. Probably does explain why I ended up babbling on occasion in a vague attempt to find a point. Watching the interperator take notes and Tony and Prachya smile and nod meant I probably missed the visual cues to focus upon certain things. I should probably explain at this point that minimal notes were taken since the interview was being recorded. Little did I know I’d have to rely upon memory as I had made a mess of the recording…

Nonetheless, persevere I must so I opened up with questions about Tom Yum Goong. I tried Google’ing it earlier and did not find much more beyond recipes for some spicy soup. There’s something about an elephant, some despicable smugglers and a young hero who knows Muay Thai. I was a bit wary about asking about the name Tom Yum Goong itself as it is automatically linked to item #14 at my favourite Thai restaurant but fortunately Prachya valunteers this information himself. Apparently the intent is to title the film after a Thai national dish – in part to distinctly identify it as a Thai film but also as a promotion of Thai culture and an instillment of a certain national pride. In fact this a theme oft returned to throughout the interview as the central purpose of both Ong Bak and now Tom Yum Goong is to re-awaken a cultural pride within the Thai populace. In making Ong Bak originally, there was problems finding funding since no one believed there to be a market for Muay Thai films in Thailand, let alone the world. This was further reinforced by the media kit’s suggestion that Tony did not really learn any Muay Thai until preparations for the film were underway – this, of course, proved to be somewhat false, but that sense of concern about about the lack of interest was self evident in Prachya. That his films, as well as those of his fellow countrymen such as Panek Rataneruang or the Pang brothers have found an international audience, he almost casually dismisses as a fad and secondary to finding an appreciative local audience.

Comparatively, questions aimed at Tony tended to clarify some misunderstandings from the press release. the biggest being his training in the lead up to Ong Bak. It seems the stunt team for Ong Bak was hand picked and have worked together long enough and know each other and trust each other enough such that little is held back in any of the stunts or fights. I’m not sure how much of a comfort it is to know that every wince at the savagery of the blows is well deserved rather than a result of camera trickery but then realism was as much an intent as the strong definition of moves and form. Of no doubt there was a lot of pain suffered for their art and yes, I did ask about the biker who gets his helmet split by Tony’s flying double knee, and no it was not accidental – they planned it from the start.

What was interesting was the broken Ong Bak triumvirate of Prachya, Panna and Tony. Panna Rittikrai is credited as the fight choreographer and is often presented as Tony’s mentor. When word of Born to Fight, Panna’s current project was propogating itself around the Interweb, I automatically assumed Tony was amongst the cast along with all the other sporting stars in the film. I was mistaken of course, and when talk turned towards Tony’s stunt team and its immutable comraderie, Panna’s missing presence was an obvious question. Apparently I was apprehensive over nothing as he will be joining them on Tom Yum Goong later and was somewhat involved in the planning stages. His remake of Born to Fight is an alternating arrangement he has with Prachya so that neither gets too stale or complacent. 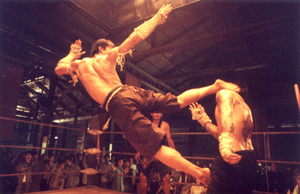 With that, my questions were answered and my time was up. I further thanked the two of them and the interpreter for their time and patience and sat on this for a week before writing a single word of it down. That week has passed and reflecting upon that little indirect chat with the face and soul of Ong Bak, it is only now that I wonder how well received Tom Yum Goong may be here in Australia. In Ong Bak, the token presence of the Australian, Big Bear, one of Ting’s opponents, was a pretty offensive character but easily dismissed as a vaudeville villain that everyone wants to see go down.

But as Ong Bak was as much a condemnation of the urbanisation of a culture’s population, Tom Yum Goong is likely to be a condemnation of Western exploitaton – with Australia likely to bear the brunt of the bad men representation. I wonder this then realise that I’m not much of a nationalist anyway so I can just look forward to the ass-kicking.

Ong Bak is released in Australian cinemas on 10 March 2005.

This entry was posted in Uncategorized. Bookmark the permalink.